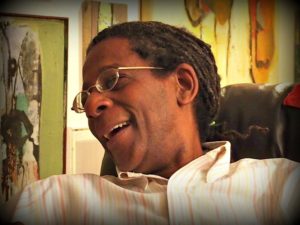 My artistic work has been greatly influenced by my Cuban identity, and my own training as a mural art restorer in the historic quarters of my own city, Havana, as well as my training and studies in Fine Art, and Art History. When I started painting, my work tried to evoke the essence of ‘la Cubanidad’ or if one prefers ‘Cubanity. Cubanity is understood here as a combination of contemporary aspects of Cuba’s social evolution coupled with elements derived from cross-cultural influences such as magic, traditions, and spirituality from African and Spanish cultures. Cuban identity possesses enduring qualities in which cross-culturalism and syncretism are recurring themes that are reflected in my work. Around those themes, I tried to explore the essence of Afro-Cuban religions, and their impact in a new colonial setting; I also tried to show the intrinsic beauty found in the layers of mural paintings in vintage buildings in Old Havana that appear as a metaphor of the social and cultural fabric  present in contemporary Cuban society. This vast experience restoring murals, and my fascination with layered polychromes hidden for centuries inside the walls and facades of the colonial architecture served as a source of constant inspiration. The Cuban tropical light inflicting a baroque ambiance on those murals along with their physical deterioration was a major inspiration for many series centered on Havana as a topic.

In 1992, I moved to Europe and, later on, to New York. These changes in my living surroundings had an impact on my artistic world. I started to integrate my Cuban identity in the depiction of more universal themes related to humankind such as psychology, philosophy and religion, seeking a sense of universality. My focus shifted and I was intrigued by issues such as identity in a multicultural and global world, solitude and loneliness, relationships, and the architecture of feelings. My Cuban perspective has gone global although it functions as my anchor in this globalized society we live in.

I normally use ‘gestural painting’ and ‘surrealist automatism’, both methods derived from Abstract Expressionism, to deliver the above mentioned concepts, and because I consider them the most suitable vehicle for my vision on how the world and society evolve around me.

As a global citizen, I perceive the political, social, and cultural events of this world, and try to reflect these events through a broad, and unencumbered freedom of expression. I rely on the subtle negotiation between the sources of occurrences and my conscience where ideas, concepts, and images are configured.

I am always questioning the process of creating images, being aware that in Art, the object and its representation can be similar but they are definitely not the same. The ‘object’ in itself differs from ‘the object perceived by us’, being the latter an aspect of the former. Hence, the world depicted in my paintings has a highly subjective component.